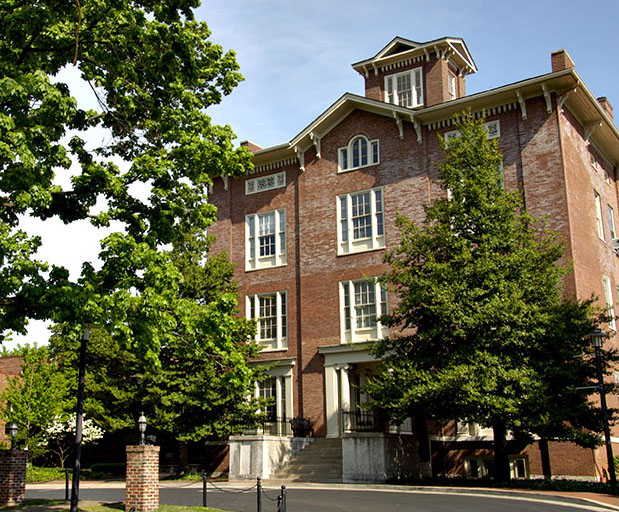 Thomas Richards ‘07 Shares His Commitment in Giving Back to Sayre

Last December we received an email from Thomas Richards ‘07 who expressed an interest in the Sayre farm. He was unaware that we even had a farm until he read the article in The Podium.Growing up on a farm in Bourbon County, Thomas was eager to “get his fingers back in the soil.” A few months later, following a discussion with Head of School, Stephen Manella, and a tour of the farm with Chris McGinley, Thomas gave a donation to the farm, and joined the Farm Committee. And this summer under the direction of John Backer ’83, he learned the ropes of beekeeping…yes, we do have an apiary at the farm.

Thomas continued to actively think of other ways to give back to his alma mater. The Don Jacobs Seminar breakfast was held last week and there sitting at one of the tables was Thomas. Organized around the principles of Earning, Owing, Spending, Investing, Saving, and Giving, the Don Jacobs, Sr. Seminar is required for all seniors. Being the CEO of Owingsville Banking Company in Owingsville, KY, Thomas was selected as a mentor. He, along with twenty-three others, twenty of whom are alumni, has agreed to mentor the senior class in this endeavor.

We are so appreciative with Thomas’ commitment of giving back to Sayre.

“I was exposed to so many different aspects of ‘education’, from sports, to theatre, to music, to mathematics, to writing. I would say that Sayre gave me a true liberal arts education.” ~ Thomas Richards ’07

An Interview with Thomas

What brought you and your family to Sayre School?
I grew up on a cattle and tobacco farm in Bourbon County, and I’m by far the youngest of three children, so my family found Sayre before I can remember. My sister Katherine ‘98 began at Sayre in Middle School, and my brother James ’97 didn’t come until the 10th grade. Both really enjoyed their time at Sayre, and in both cases they loved the theater and music departments under Ms. Spoonamore, now Mrs. Berryman. They were both very active with various plays and Sayre Singers, and I remember as a little boy, age 6 or 7, attending productions of “South Pacific” and then later “Arsenic and Old Lace” on the stage in the old bus station Middle School.

A long answer to a short question, but my siblings basically brought me to Sayre. I came to Sayre officially in the 4th grade, but I remember my visit to Mrs. Gross’ 3rd grade class to this day. The style of teaching was so different from the school I was attending at the time, and I just remember being very engaged. I stayed at Sayre from 4th grade all the way through to 12th grade, and loved every year of it.

How many years were you here?
I was at Sayre for 9 years.

What is your favorite memory of Sayre?
That is a tough one, because I have a lot of great memories at Sayre. I remember loving the Fall Festival especially while in Lower School. I remember the haunted houses in the art building, but my favorite Sayre memory of all (there is photographic evidence, but not sure if there is video evidence as it was pre smartphones) was at my Senior Prom.

We had a great band, the Jimmy Church Band, for the dance and they were doing a fantastic job rocking out to whatever the hits were at that time. I got a call from my friend Sean Jump ‘07 partway through the dance (he had decided not to attend) and he asked if I thought I could get the band to let us play a song together (he was a great guitarist, and I was a decent drummer). I told him I’d try my best, but that I wasn’t sure the chaperones would let him into the dance.

I went to the bandleader first and asked if he’d let a friend and me join them in on a song. He was a little hesitant, but he acquiesced pretty quickly. The big challenge was convincing the Dean of Students, Ms. Ryan at the time, to let Sean into the Prom. I begged and pleaded with her to let him in, and I even promised if something bad happened I’d take the blame for it...and she finally said yes.

So I got Sean into the dance; he had crazy wild hair, a polo shirt, pants, and I think flip-flops. I was all dressed up in a tux, so we were quite the pair. The bandleader asked what we wanted to play. I said anything in 4/4 time, and Sean suggested “Johnny B. Goode”.

So in short, my favorite Sayre memory was hearing Sean Jump ’07 start that awesome guitar riff of “Johnny B. Goode” and me coming in on the drums and having a great performance at our Senior Prom.

What college did you attend and what degree did you earn?
I was fortunate to attend Centre College, and I earned a B.A. in Economics and a Minor in French. Go Colonels!

What business are you currently in?
I am currently the CEO of Owingsville Banking Company in Owingsville, KY. We are a small community bank that has three locations, all are located in Bath County. I am proud to say I am the fifth generation in my family to work at the bank, and I always tell people I hope I’m not the last.

One thing I will add; although we are a small bank we were somewhat instrumental in having a piece of federal legislation passed to help small rural community banks better serve their customers. You can find the Congressional testimony at the following links:

How did Sayre prepare you for your life today?
Sayre helped prepare me for life in a number of ways. I think the best way in which it helped prepare me was in the way I was exposed to so many different aspects of “education”, from sports, to theatre, to music, to mathematics, to writing. I would say that Sayre gave me a true liberal arts education, in that I was able to participate in a wide variety of academic and non-academic pursuits.

You’ve become involved at Sayre during the past year, and your interests led you to the Sayre Farm. Could you tell us more about your experiences?
I kind of gave this one away in the beginning, but I grew up on a cattle and tobacco farm in Bourbon County. My family moved to Lexington when I was a freshman in upper school, so I spent many of my formative years on the farm with a pack of dogs just roaming around and enjoying nature. I read an article in the Winter 2015 issue of The Podium describing the Sayre Farm, and I was struck by how good of an idea it was. It is a fantastic use of otherwise unused land, and it provides countless opportunities for students from Pre-K through Upper School to learn about and physically interact with nature.

I expressed my interest in trying to help out in any way that I could, and dove in this summer assisting John Backer ‘83 with the apiary. I knew nothing about bees, but John has been a great teacher. Throughout the summer I’ve gone out to the farm to mow around the apiary, feed the bees, and help check on their general health. So far they seem to be doing very well, although I still have a lot to learn about beekeeping.

If asked, what are the most important things you would tell parents and/or perspective students about Sayre?
Your experience at Sayre is what you make it. The teachers are wonderful and care about their students, and there are numerous extracurricular activities in which to become involved. The potential for a well rounded and rigorous education is there, but it is up to the individual student and family to make the most of it.